This month’s post comes from the December 1914 issue of ‘Nursing Notes’ and has been put together by Autumn, a volunteer to the RCM Archive.

By the time of the First World War’s famous Christmas truce along the Western Front 100 years ago this month, Europe was fully aware that it was “face to face with a cruel […] war”, as the leading article in this issue of Nursing Notes puts it. Entitled “What am I Doing for England?”, the article urges the nation to keep on working to the benefit of the war effort, even in its grief for the fallen: “The only plan is to be too busy for tears”. Particular emphasis is put on the role of women in the work to be done, with Florence Nightingale cited as an example of a woman who was unhesitant in pursuing her life-work once she knew what it was.

By this stage in the War, Nursing Notes had a new feature called “War Notes”. Under this heading is a piece particularly relevant to midwives, nurses and others responsible for the welfare and nutrition of mothers and infants – “What to Use in Place of German Preparations”. This not only recommends substitutions for medicines and dietetic products of German origin but also points out that many German brand-name drugs have generic alternatives, an example of this being the Frankfurt product Purgen, which could be ordered under its generic name of phenolphthalein. In a similar vein, an advertisement for the antiseptic, Sanitas-Sypol states that “Patriotic Surgeons and Nurses are asked to use this British Antiseptic in lieu of Lysol”. Other advertisements also target the patriotic pound. For example, Glaxo points out that the Glaxo Feeder is “English Made Throughout”, the Medical Supply Association assures readers that its India-Rubber Hot Water Bottles are “Guaranteed British Make”, and Ingram’s Agrippa Band Teat & Valve is labelled as “British Manufacture by British Labour”. 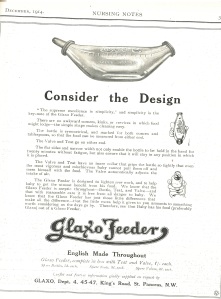 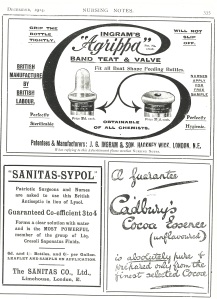 Published under the title “Letters from a Handy-Man at the Front” are some extracts from letters written to Mrs. Brian Wilson by her husband, the eponymous handyman. Jane Wilson had previously been President of the Midwives’ Institute between 1894 and 1911, so Nursing Notes readers would have been interested in learning about her husband’s wartime endeavours as a freelance interpreter in France. Taking it upon himself to go and help England’s ally, he had been on the continent since the first month of war. He was spending his time helping mothers and children to get home from railway stations, tending to wounded men in hospitals and even sending some of the “poor fellows” to England for convalescence:

‘My knowledge of Walloon has come in quite usefully, as no one speaks it here; ‘tis quite easy, only an odd mixture of French and Flemish. The wounds have been worse lately, and I see the saddest sights, as often after an operation the patient is able to whisper a few words to me, and often only in his early dialect.’

At the end of September he had pleaded with his wife “Do please get more nurses to come out”, having noticed the shortage of nurses in France as early as late August.

In a world where war was rapidly depleting the adult population, a midwife’s role in preventing infant death seems particularly poignant. As Lucy Robinson of the Association for Promoting the Training and Supply of Midwives writes in a letter published under “Reports from Associations”, the value of each new life is even more apparent than usual at a time when so many adult lives are being prematurely lost.

This issue of the journal ends with a Massage Supplement, where there is one more reminder of the omnipresent shadow of war– a notice entitled “Massage for the Wounded”, which tells of how The Almeric Paget Massage Corps had already given 13,000 treatments to the wounded by 31 October.

By way of light relief, we end by reproducing from this issue an extract from the satirical paper ‘Punch’ taking a tongue-in-cheek look at the sometimes exaggerated contributions made to the war effort by some members of the aristocracy:

‘Stella Clackmannan’s had a fortnight’s training as a nurse and is off. I ran in to see the dear thing the night before she left. She’d been posing to a photographer in her Red Cross uniform for hours and hours and was almost in a state of collapse; but the heroic darling said she was ready to do even more than that for her country. In one photo she’s sitting by a cot with her hands folded, looking sad but very sweet. In another she’s standing up, singing, ‘It’s a long way to Tipperary’; and in a third she’s bandaging someone (she had one of the footmen in for this photo), and à mon avis, it’s the least successful of all. She appears to be choking the poor man! However, they’re immensely charming, and will all be seen in the ‘Aristocratic Angels of Mercy’ page of next week’s People of Position.’